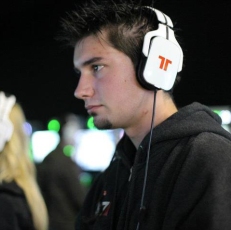 Passionate and determined, I’d like to work with  teams who throw themselves into challenging projects. My main goal is to work especialy on interactions between players and story. I’m aiming to work on  projects where storytelling plays a major role in the experience. I have a personnal liking for narrative and coop systems and ways to tell stories.

I’m specialised in narrative, level and game design and I’m working on my own pen and paper RPG “Exodus” since 2012. I love RPGs games since I was 12 years old (both paper and video) and one of my dream is to make the best adaptation possible of this experience in a video game.

Even if my personnal preference goes to narrative design, I’m also a game and a level designer and I  love to work in those two domains too, especially on 3D games. Due to my passion for RPGs and board games, I have a personnal liking for cooperative games and I’m always in search of new ways to enhance coop play. Moreover, I have some skills in level building, thanks to a affinity for visual compositing, drawing and my initial formation in cinema.

I grew up with ancient myths, legends, old Hollywoods films and games like Baldur’s Gate and the first Fallout. I love games that put immersion and roleplaying mechanics at the heart of the experience. I’m also a gamer and I have many favorite games. Overall, the Dragon Age and the Mass Effect series are in the top of my favorites for the intense emotions they create through interactions with NPCs. I’d really like to work on that kind of games to offer the players new adventures and exotic lifes in other universes.
But summerizing what I like in game to the only RPG genre would be too reductive. I’m interested by a huge variety of games and if narrative ones are among my favorites, I also love tactical and management games, like Xcom or Battle Brothers ; explorations games like Subnautica or Hack’n slash and related games, such as Diablo, Borderlands, The Division… And even when I don’t want to play a game, or if I can’t, I always keep an eye on released productions and news related to the video games medium.
Playing many different games is one of my way to stay fresh in my concepts.

I have huge experience in pen and paper RPGs, their mechanics and their community, from AD&D to Rogue Trader and many, many others, regardless to universes and systems. I’m also a specialist in classical, board and miniature games. I’ve written a paper for my third year in Supinfogame about the relationship between RPGs in video games and pen and papers. I’ve focused my researches on how to create the best interactions between storytelling and gameplay.

I have an interest in european and chinese history, both ancient and medieval, completed by a good knowledge in many legends and myths of humanity through ages. I’ve been influenced a lot by Joseph Campbel’s theories, like the monomyth, and I know many of the ways to create stories and characters.

Feel free to contact me by e-mail for any informations about me, I’m always curious to discuss about many subjects and points of view. I strongly thinks that dialogue and exchange is the way to be better as a human.